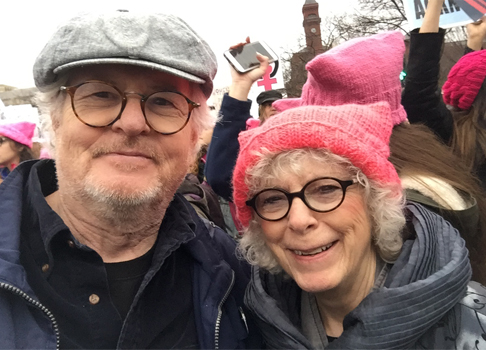 2017. What a start to a new year! Oh, I have nothing to complain about personally. I have learned to appreciate retirement. My “body clock” has reset itself so I can stay up late at night and sleep in in the mornings. I have stacks of great books to read and time to read them. I have a tiny “studio” set up and always available to me in the corner of our sunroom. When I feel like it, I paint a canvas. I have an old computer on which I can write stories and plays. I have a comfortable home and a fun second home near our grandchildren. I have one of the world’s best cats. I have a terrific spouse who willingly engages in enterprises such as making a pilgrimage to and searching for Tallulah Bankhead’s grave. (It’s in St. Paul’s Cemetery outside Rock Hall, Maryland.) I live near the ocean and can visit it whenever I want. So, I recognize that I am doing fine. The country not so much.

And that is the crux of the issue. In retirement, I am spending way too much time now trying to figure out how to get through these next four years. As a person who’s wound pretty tight most of the time, the opening salvos of the new administration have been agony for me. For more than a week now I have been waiting for their blowtorch to sear my favorite listening and viewing stations – NPR and PBS – and to disintegrate the National Endowment for the Arts and the National Endowment for the Humanities. (At one time, I served on the Board for the Maryland State Humanities Council and attended one national conference. It is definitely an organization worth saving.) In an effort to decrease government spending this administration proposes to cut programs that represent 0.02% of the federal budget, if that much. This, at a time, when local municipalities are learning that arts and entertainment are revenue drivers. They can and do make money for your town!

I am an “arts person.” I am not famous nor is fame an ambition of mine. I like to write and have written professionally, which simply means I have been paid for it. I like to draw and am teaching myself to paint. I am not a “great” artist, but have produced some interesting work. I am making photographs as well and am improving my ability to “see.” I have not directed a play in a year and a half and while I miss it, I continue to patronize theatre enterprises as an audience member. I love the arts!

I do not consider myself an alarmist. But I am alarmed. An attack on the arts is just one of the things that concerns me. There is so much that is being “attacked” and a good deal of it is a foundational attack, an attack on the promise of America, on what America is supposed to be. These attacks are antagonistic, mean-spirited, spiteful, petty, and vengeful. They are also stupid, as in short-sighted and hugely counterproductive. That segment of America that voted for this, apparently wanted someone with no government experience, and that’s sure what they got and it shows.

Banning Muslims and refugees, ginning up plans to defeat an unconventional enemy – an action that will lead to more death and destruction with little hope of success, gagging doctors and scientists, setting off witch hunts in federal agencies, demeaning and disavowing the free press, sowing disinformation, lying boldly and without scruples. The dark American underbelly of the beast we are becoming is now fully and unselfconsciously on display.

So I marched. I haven’t joined a protest march since I was in college and rode the Hood College bus to Washington for the march on the Pentagon in 1967. Then, I was barely twenty. Now I am seventy years old and it was just as thrilling this time. Five hundred thousand men, women and children of all races, colors, and creeds joined the Women’s March on Washington. It was peaceful. It was exhilarating. It was serious and it was funny. It was solidarity and it was saying, “This is who we are, not that. This is what democracy looks like.” This was a worldwide coming together of three million people to stand up for truth and justice, for the environment, for women’s rights, for freedom of expression, for equal rights for all.

Retirement is meant to be a time when one can rest from one’s labors. Well, there is no rest for the weary now. No matter how old or how tired, this is a fight for the soul of the nation. And considering that our nation remains, to date at least, the leader of the “free world,” perhaps we are fighting for the soul of the world.